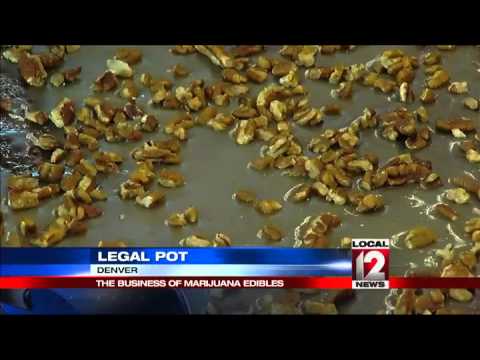 DENVER, Colo. (Jeff Hirsh) — One week from Tuesday, Oct. 27, Ohioans vote whether to legalize marijuana. Whatever people think of legalizing pot, the argument that legalization creates new jobs is true if people look to pot-legal Colorado. According to the states Marijuana Enforcement Division, more than 21,000 people are licensed to work in the marijuana business. That does not necessarily mean those 21,000 are working right now because some licensees may not have jobs. But the number is still more than a 300 percent increase in the year-and-a-half since recreational pot stores opened in Colorado. Medical marijuana was legal for several years before that. At first glance, it looks like any other bakery. These are nice and hot, said Executive Chef Hope Frahm, pointing to some treats just out of the oven. These are oatmeal butterscotch, she said, looking at some others and, shes making some caramels, pointing to another member of her staff. Frahm is a talented pastry chef who once worked for famous chef Wolfgang Puck in Las Vegas. Now, she is at Loves Oven in Denver, which is a bit different than your typical corner baker. This is my marijuana trim, Frahm said, pulling the lid off a container. Thats right. Marijuana. The secret ingredient there is no secret at all. Its pot. Loves Oven makes marijuana-infused edibles. The owner of Loves Oven, Peggy Moore, looks nothing like your stereotypical stoner. This is a business venture for Moore, who spent a career in insurance before taking over a bakery which started with one person a few years ago, and now employs 30. Loves Oven began after Colorado voters OK’d medical marijuana and the shop made about 0,000 a year. But when recreational pot stores were OK’d in 2014, Loves Oven got a whole lot of love from consumers. Last year we grossed .6 million. We expect to double that this year, Moore said. They make a dozen different types of bakery products at Loves Oven. They have gluten-free and might go vegan with one confection. But like most other bakeries anywhere else, the most popular items there are brownies and chocolate chip cookies. But the chocolate chip cookie containers also say cheesy skywalker on the label. Cheesy Skywalker is the strain of marijuana which is infused into these particular cookies. Colorado requires recreational marijuana edibles to have no more than 10 milligrams of THC per piece of baked goods. THC is the substance which gets people high and there is worry in Colorado that children being children, youngsters could gobble down a cookie or two or three with disastrous results. Yes, absolutely, Moore said. There certainly is a concern about what happens if a cookie gets out of the package, because they do look like your typical cookie. So the packages from Loves Oven have seals to show if theres been tampering. The packages are also child-resistant and the individual products inside the packages are sealed and have warning labels. Loves Oven sells to retailers, who then sell the baked goods to the public, at an average price of between 0-5 for a package of 10 cookies or other items. But dont try to get any of this love shipped out of Colorado. Absolutely not, said Executive Chef Frahm. We actually have people call and ask, but its drug trafficking. Thats because while pot is legal in Colorado, it is still illegal in most other states and illegal federally. Take these sweets across the state line and youre a criminal. Eat them in Colorado and youre having dessert. These are definitely not your moms or grandmas cookies, Peggy Moore pointed out. The question now; are Ohio voters ready to take a bite? In his next report from Denver, on Local 12 News Wednesday, Oct. 28, Jeff Hirsh looks at Driving High: What legal marijuana means for enforcement of DUI laws. Follow Jeff Hirsh on Twitter @local12jeff and LIKE him on Facebook Follow us on Twitter @Local12 and LIKE us on Facebook for updates!
Bookmark this Post(0)