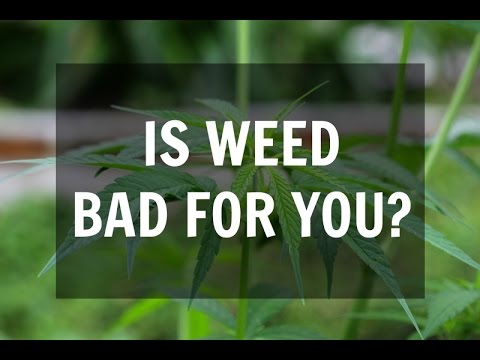 Is weed bad for you?
Depending on who you ask, weed is either a cancer fighting wonder drug, or the devil trying to corrupt us all. And since there’s 22 states considering changing their marijuana laws, we wanted to get to the bottom of the question – is weed really bad for you??

Now, before we get started on the biological impacts of what happens when you get high/ blaze/burn/light up/scroll/bake (scroll? really?)

Let’s break the potential down side into three sections. The brain, the lungs, and cancer.

First off – the brain.

It is assumed that the use of marijuana by teenagers is harmful to brain development – the National Institute on Drug Abuse (NIDA) warns teens in particular to avoid marijuana as their little brains are still developing.

And weed’s main psychoactive ingredient THC definitely does act on the brain – it mimics the brain’s natural endocannabinoids, which regulate our physiological functions, such as appetite, pain, memory and mood. Now anything that affects the brain’s chemistry should be used very carefully -our brain is a well regulated machine and it is a bad idea to fu** with that system – for example if you take away our brains ability to regulate appetite you can get the munchies – which is why there’s a stereotype of the fat stoner.

But is smoking weed actually damaging your brain? Well your brain does adjust to anything you put into it, but to date, the studies that I’ve seen haven’t been able to prove any serious long term effects on the brain itself from moderate marijuana consumption. So on the danger spectrum with fatty foods here and heroin here, I’d say weed is definitely somewhere in THIS category.

Ok so the lungs. if we look at lung health – There is a huge disagreement about whether or not marijuana smoke is harmful to the lungs. For example, according to a 2014 study, there is no difference in the breathing of those who do not smoke at all and those who smoke marijuana regularly. But Lung.org contests that all smoke is harmful to the lungs. Basically, there is no clear, demonstrable evidence that pot-heads have anymore difficulty breathing than the average non-user.

Interestingly, there may be reason to believe that marijuana smoke actually has a *positive* effect on lung health (and I’m not joking). Though the causes are very unclear, there is research from a Nature Partner Journal to suggest that Forced Vital Capacity, the amount of air you can force yourself to hold, sees an overall increase in recreational marijuana-smokers – assuming they don’t smoke tobacco products as well.

Though the the American Lung Association continues to push for more research into this, and they should, the data suggests that there isn’t too much harm to the lungs as far as marijuana smoke goes.

And now Cancer
So we know that tobacco smoking can give you cancer, so is week smoking ALSO going to cause cancer?
If you look at the research so far, it looks like it’s actually the opposite – marijuana can save lives by helping cancer patients eat and sleep and recover quicker from the effects of cancer treatments. There is also *some* evidence that suggests marijuana may actually actually kill cancer cells! As this article on cancer.gov states: “cannabinoids may inhibit tumor growth by causing cell death, blocking cell growth, and blocking the development of blood vessels needed by tumors to grow.” But as they say: more research is needed.

SCIQ ON THE YOUNG TURKS
Produced by Jayde Lovell and Bec Susan Gill. ScIQ is a partner of the The Young Turks Network.