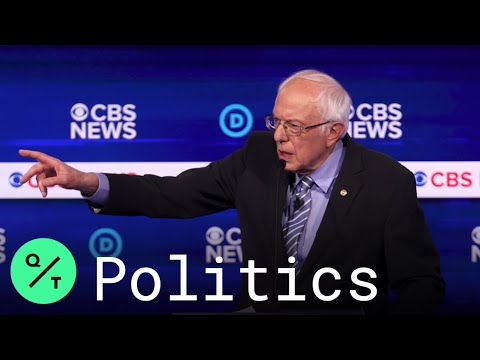 Bernie Sanders absorbed an onslaught from all six rivals at Tuesday night’s debate as the Democratic presidential candidates faced off in their last encounter before a crucial round of primaries that will likely set the course for the rest of the race.

Sanders has taken over as the front-runner in the Democratic race and the debate in Charleston, South Carolina, was a chance for the other six candidates to try and stall his momentum.

Warren, who has generally refrained from attacking her fellow progressive in previous debates, suggested Sanders has good ideas but hasn’t offered details about how he’d accomplish his goals.

“Bernie and I agree on a lot of things, but I think I would make a better president than Bernie,” Warren said. “And the reason for that is that getting a progressive agenda enacted is going to be really hard, and it’s going to take someone who digs into the details to make it happen.”

But most of the candidates spent almost as much time focused on Bloomberg, who has been rising in national polls as he’s spent more than $500 million on advertising.

Warren renewed her attacks on Bloomberg over non-disclosure agreements signed by women who’ve complained of sexual harassment at his company. Bloomberg said last week that he’s willing to release women from three non-disclosure agreements related to offensive comments they say he made, but Warren called on him to sign a blanket release for anyone who has an NDA. #DemocraticDebate #BernieSanders #Marijuana

“I don’t know what else she wants us to do,” Bloomberg said. “The trouble is with this senator, enough is never enough.”

Warren referred to one of the NDAs concerning a woman who filed a complaint in 1995 alleging that Bloomberg told her to “kill it” when she told him she was pregnant.

From the opening moment, the debate was a brawl, with Bloomberg responding to a question about the economy by saying that Putin wants to see Trump stay in the office and has been helping Sanders online because he wants to see Sanders lose to Trump.

“Let me tell Mr. Putin, I’m not a good friend of President Xi of China,” Sanders retorted in a reference to comments Bloomberg has made about the Chinese leader. “Hey Mr. Putin, if I’m president of the United States, you’re not going to interfere in” U.S. elections, he said.

Amy Klobuchar, Pete Buttigieg and Tom Steyer joined in going after Sanders, saying he’s unrealistic and hasn’t accomplished much in all his years in Congress. Klobuchar also faulted Warren.

“It matters if you can actually get things done,” Klobuchar said.

Buttigieg said nominating Sanders will lead to Republicans controlling Congress. The Democrats who helped win the House majority in 2018 are running from Sanders’s plan “as fast” as they can.

“I’ll tell you what it adds up to, it adds up four more years of Donald Trump,” Buttigieg said. “It’s time for us to stop talking like the presidency is the only office that mattered.”

When the topic turned to foreign policy, Sanders faced questions about his past statements, including those in a “60 Minutes” interview Sunday in which he praised Fidel Castro’s literacy programs. Sanders said he’s consistently opposed authoritarian regimes but recognized that sometimes those governments accomplish good things.

He said that former President Barack Obama had noted that “Cuba made progress on education” and other areas, and that he was doing the same.

That prompted an attack from Buttigieg, who said Democrats won’t win elections by “telling people to look at the bright side of the Castro regime.”

QuickTake by Bloomberg is a global news network delivering up-to-the-minute analysis on the biggest news, trends and ideas for a new generation of leaders.